When I decided to take the leap of faith and pursue photography full time, I knew that the Maui Wedding Expo, hosted by the Maui Wedding Association, was on my list of things I must do! It’s a great way for local and visiting brides to check out different vendors and it’s a great way for us vendors to connect with one another for some awesome collaborations (more on that coming soon!).

When I got married five years ago, Pinterest didn’t exist. Crazy, right? How did I plan? How did I DIY? I followed a few blogs back then but nothing like the resources that are available to brides today. And Pinterest, God bless it’s little virtual soul, helped me get together my pallet wall for this beachy-vintagy inspired booth!

Above you will see my rough sketch. I had an idea of what I wanted, but doing it was a whole new venture. I was so lucky that it all came together in the end!

First thing’s first: my husband is amazing. He knows how to use an airless sprayer and was just as committed to my vision as I was. He obtained the pallets from his work and to to work painting them for me. And believe me when I say that these suckers really SUCK up the paint. Three coats later and we were finally happy with the color! 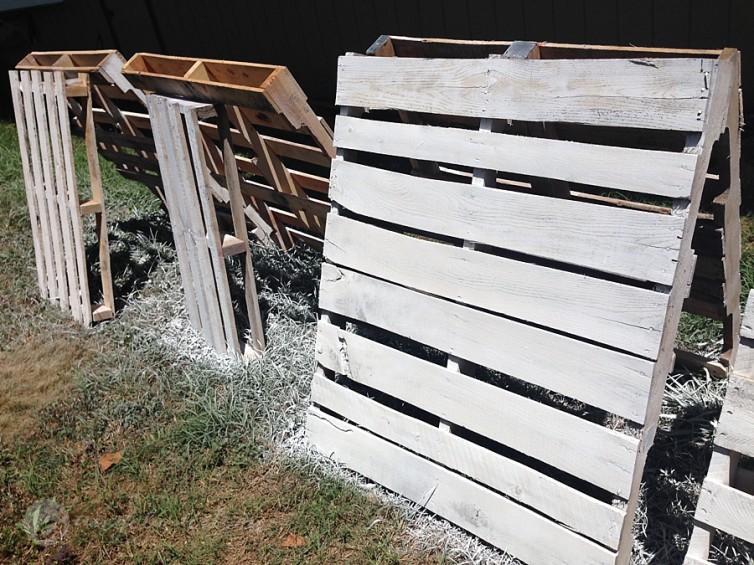 The next part was up to me. I borrowed a projector from a friend and projected my logo on to the pallet. Lowe’s had some great pain options for me and I was able to find a gray and a blue that were to my liking. 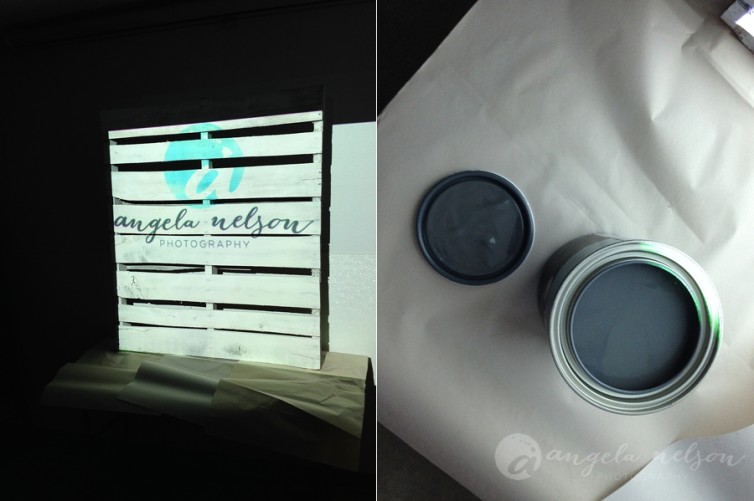 I meticulously outlined the logo with pencil and then, ever so carefully, began to fill in the lines. A little secret about me: I’m a perfectionist–but I’m trying to let it go. But putting paint on something so crisp and white is terrifying, so I’m not sure how much I’ve really let it go (Is it just me or are you also singing that Frozen song?!).

After I was finished, Anthony took over. He mounted the pallets together in the back. He had the top three pallets together and the bottom three together. He made brackets out of 2x4s and those metal thingy-mah-doos (seriously, I’m not inclined in this way at all; I surely would have given up on this if it weren’t for Anthony) so then that way my booth wouldn’t spontaneously collapse on any potential brides. Because that would be the.worst.

He looks pretty ding-dang proud of himself. I don’t blame him; he really is a genius in this way.

After he did a test run, he had to deconstruct the whole thing (well, down to the two pieces of three pallets). He strapped them to the top of his Dakota and they were ready to go in the morning!

Meanwhile, I had some mounting to do. With a little foam core and spray glue, these babies were mounted in no time flat.

The big day had arrived! We arrived several hours prior to the opening of the show at the Sheraton Kaanapali where Anthony got to work setting everything up. The worst part of this whole process was carrying those REALLY REALLY heavy palets to the expo! Oh my goodness! Shout out to Chris from KCK Entertainment for being ah-mazing and carrying one of the pallet groups with Anthony. I’m a strong girl, but dang, these things were probably 100 pounds a piece! 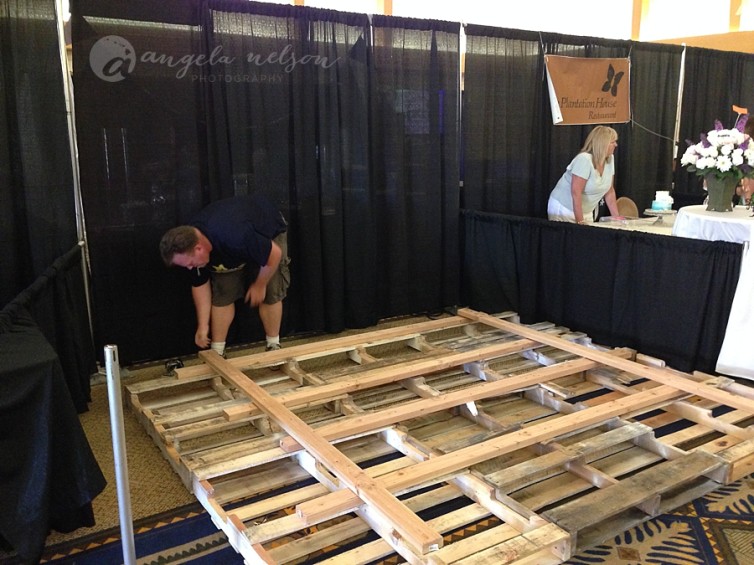 It is important to note that I lost about 3 feet in the back of my booth because of the supports on the wall, but truthfully I didn’t need that much space. The brides were drawn to the back of my booth for my my giveaway and album and I was right there to answer any questions the may have had!

Finally, it was UP! I got the school desk off of Craigslist for a whopping $30 (but we did re-paint it), the chair was already in our home, and the side table from my friend. The flowers were by Lisa over at Blossoms Hawaii (I will have more photos of those in my Part Two post). 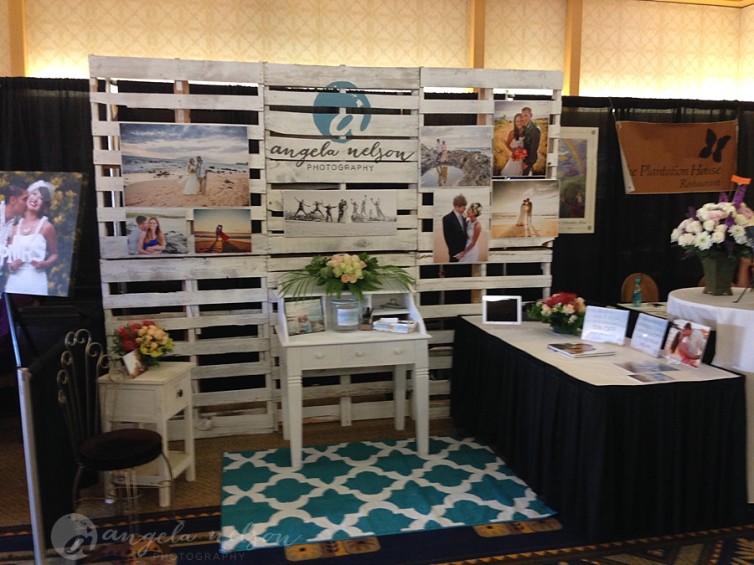 Only one thing left to do: stand in front of my vision (which is pretty close to the original) and try to contain my elation. I did a pretty good job of it, don’t ya think? 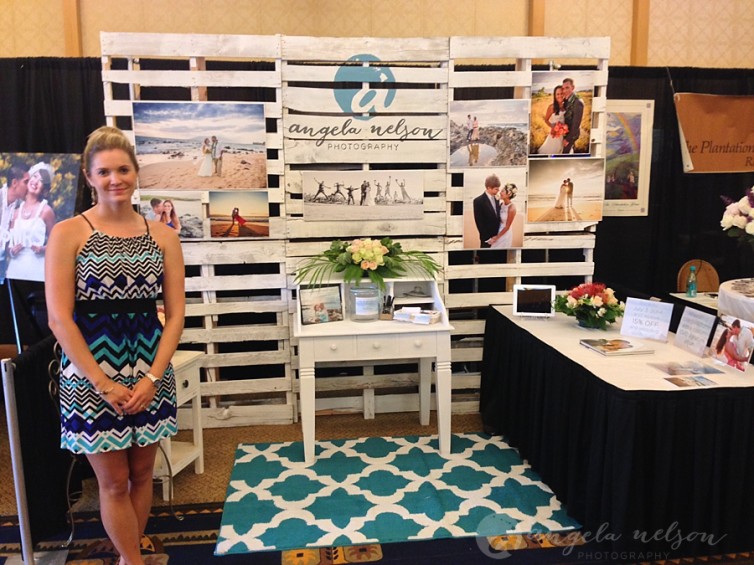 Want to see more detail shots of what was in my booth? Stay tuned for Part Two: Maui Wedding Expo booth–the details!

Disclaimer: All photos taken were with my iPhone 5, not my big-girl camera!

If you haven’t read part one of Making the Perfect Maui Wedding Expo Photography Booth, head on over there to see how I made the pallet walls! This post is all about the details and is mostly aimed at other photographers who are preparing to do their first wedding expo and need some ideas! I… 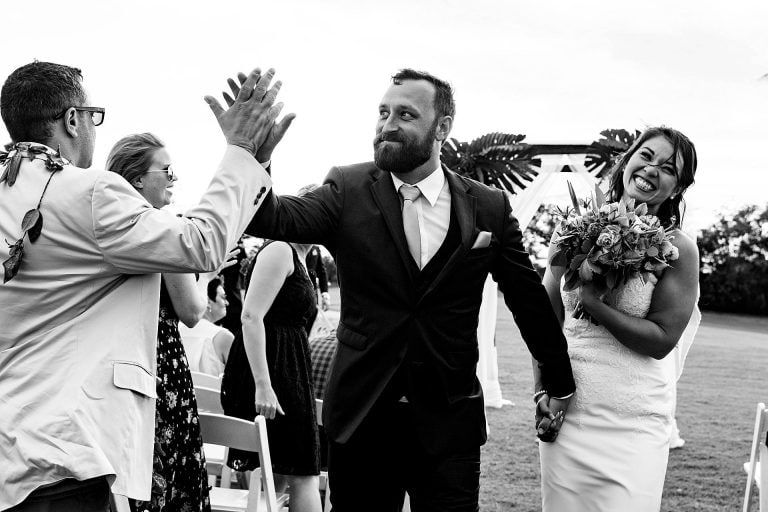 At the end of every year, I like to take the time to reflect back on my past weddings. The ups, the downs, the complicated shots – what worked and what didn’t. It’s part of being an artist and striving to take my work to the next level. But another part of that process is… 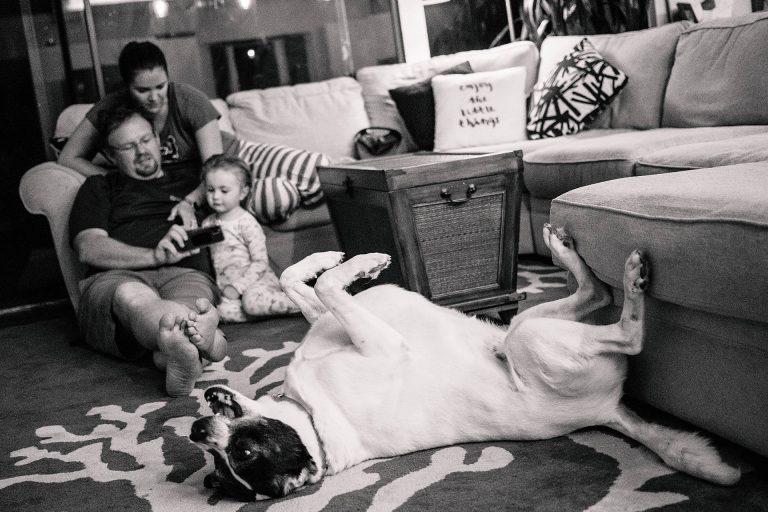 The images dropped in my inbox today and, to be honest, I was totally blown away. And weirdly emotional. Because things are going to change. Not right now, not tomorrow – but slowly over time. The day-to-day of our lives as a family of three are numbered (don’t worry, this is NOT a pregnancy announcement)… 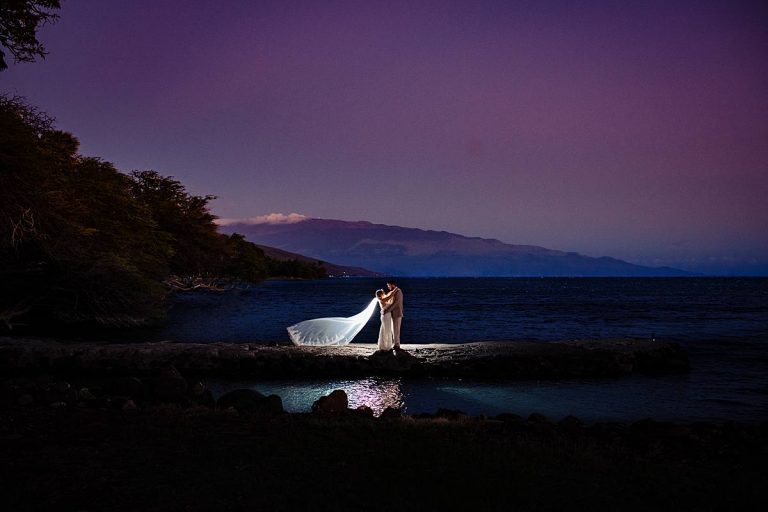 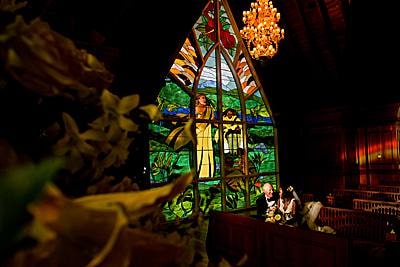 First, let’s start here: What the heck is a Wedding Moment-Killer? Definition: When authentic and unscripted moments happen, but circumstances end up stopping the moment and authenticity turns into a staged production of “emotion.” I’m not going to lie: I’ve had this kicking around in my brain for quite some time. As a photographer who…

Hawaii is a really unique destination wedding location and, believe it or not, things work a bit differently out here than they do on the Mainland! Planning your Hawaii wedding has lots of ins-and-outs   1. Be realistic with your budget   I’m sure you were already thinking of this. But weddings in Hawaii will…